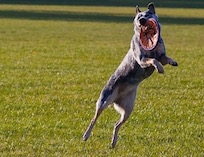 As I walk the park this morning, I see a young couple trying to play disc golf. Their terrier thinks he is part of the game too. I laugh as I watch. Every time "dad" or "mom" try to throw the disc towards the goal, the dog catapults into a rocket run and retrieves the disc back to their starting position. They keep yelling, "No, Butch! NO! Put it down! Butch! Sit down!"

Now, I'm no dog obedience trainer and I'm especially not an expert on training dogs for sport, but I had to chuckle at this escapade. What did they expect, when their little furry child isn't on a leash? And for goodness sake, this is like heaven for a dog. Of course he thinks he's part of the game!

I'm assuming they think it's unfair to put Butch on a leash. So they let him run around. But the constant yelling throughout the park today, sets another thought in motion for me: "You take your dog to the park, you throw little round discs all around and you expect your dog to not be engaged?" Weird.

Butch saw me as I made the final lap and made a dash for me. Of course, mom and dad are yelling, "Butch - get over here! Butch - NO!" But me being the dog lover, I just bend down and put my hand out as if to say, "It's OK, Butch, I understand you." He sits in front of me and I pet him for a minute. I talk to him, "I'm sorry Butch. I get you. Mom and Dad take you to this awesome park and you're not aloud to be a dog. Just take it in stride, Butch. They'll come around some day."

Parenting is a tough thing. And we all make mistakes and do dumb stuff. But a favorite memory of mine happened when I insisted that my kids NOT play in the mud and the rain, even after letting them play outside. I remember yelling, "Get out of that mud puddle! Don't you dare get dirty!" Yet, I still let them play outside after the storm. Finally, my friend said (since we were at her house), "Oh, just let them get dirty. Who cares. They're having fun. And they'll never forget the day their mother said they could frolic in the filth."

She was right. My kids never forgot that.
Let a kid be a kid. And for sure - let a dog be a dog!

Maybe I'll go back to the park and rescue Butch from his conflicting mixed-messaged parents. I have plenty of new mulch in my backyard he can roll around in. :)