She Put the Fun in Functional! 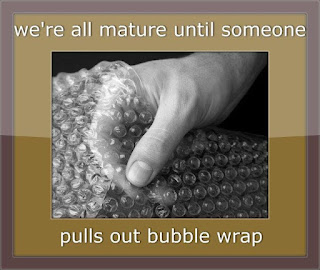 The last Monday of the month of January is considered to be "National Bubble Wrap Appreciation Day!" What a rejoicing day for this abnormal crazy - who will celebrate the strangest things in life! "The primary purpose of bubble wrap is to protect fragile items either in shipping or storage. People also get enjoyment from popping the bubbles in bubble wrap..", says the article. No duh. The popping  of the bubbles is more than enjoyment, it's pure ecstasy as far as I'm concerned. Our UPS Store here in town has a huge roll of that "plastic sealed air" out in the open. It must be three feet tall and three feet wide. I really do have to restrain myself from attacking it.

Today, I finished packing away some lingering fragile Christmas dishes (don't judge, I know it's Jan. 28th), and of course I wrapped them in bubble wrap. I was honoring the day without knowing it! I had to step on a few sheets, just to hear that "pop, snap - crack", and now I feel so relaxed and stress-free. LOL.

So, truthfully, bubble wrap is both functional and "fun" at the same time. Right? Right. It really does describe me when it comes to what I do for a living. It's pretty cool that "fun" is in the word functional too. It's almost like it's a license for me to be fully sanctioned, official, useful and practical, but also having a merry-making, entertaining time.

In The Humor of Christ, Elton Trueblood argued, "There are numerous passages (in scripture) . . . which are practically incomprehensible when regarded as sober prose, but which are luminous once we become liberated from the gratuitous assumption that Christ never joked. . . . Once we realize that Christ was not always engaged in pious talk, we have made an enormous step on the road to understanding."

I am serious....serious about conveying to all, that living for Jesus is serious business; to be His eternal image-bearer. I love the humorous, satirical sting when Jesus said “Woe to you, scribes and Pharisees, hypocrites! For you are like whitewashed tombs, which outwardly appear beautiful, but within are full of dead people’s bones and all uncleanness..” (Matthew 23:27) The Pharisees and scribes needed some serious bubble wrap therapy, I'm thinking. Their neatly packaged rules and rituals needed releasing.

And how about this for some Jesus-comedic-relief - He told the religious leaders they were completely blind by missing the whole point of being a God-follower: “You blind guides, straining out a gnat and swallowing a camel!” (Matthew 23:24). Now that's funny. Straining out a gnat would have been hard work for anyone—but impossible for the blind. And what could be more ridiculous than swallowing a camel? Hilarious. This strange and pithy statement undoubtedly caused laughter to  erupt, and possibly even a smirk by the Son of God.

Jesus put the "fun" in functional in those instances, delivering truth while tuning them up. So, I'll wrap this up by saying, "For those of us who are full of hot air, step and pounce on all those air bubbles and release the tension, the tautness and pressure - and dance on, my friend! Set yourself free from religious bondage - it's National Bubble Wrap Day!" (and that's a wrap..)