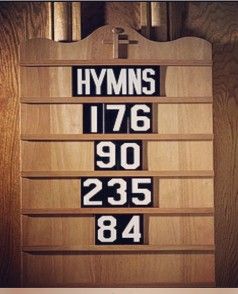 Remember the days in many U.S. churches where this was how the week’s Sunday #worshipset list was announced? Yeah. Those days... No glitzy social media promotion announcing the “set list”. No drama or worship war with the band on stage. We actually held a Hymn book. Congregants sang, and actually heard themselves sing. Sundays felt more like community than a Broadway show. And you never heard people say (to the pastor, as they exited) “Wow. That worship team ‘killed’ it today.”

Now, before you get your pants twisted in a knot and think I’ve fallen off an archaic cliff, I’m VERY excited when MUSIC is part of #contemporaryworship. The key word there is #music. Remember: WE (the #boomers) were the first to introduce the “new” worship band form back in the early 70s. So, I’m #allin with real music that edifies, encourages, and is both vertical & horizontal in form. But something burns deep within me shouting, “I’m less interested in your form, or supposed finesse, or intense #worshipband rehearsals (where, God forbid, there would be a move of God —changing the set list in the actual “performance”, as some say). I travel to over 150 churches a year or more, with a vast differential of traditions, culture, style, mood, mission—with mega-music done well, to minimal music emphasis done marginally, to some with very limited musicianship.

But all of us —in the seats or pews —are crying out for the same thing: Let everybody sing! Let the walls be filled with voices! Let’s be less impressed with style, and hunger more for Holy Spirit-filled anointing in our music. While in Haiti, watching young orphans sing till they were exhausted and out of breath with euphoria, reminds me again, “This has nothing to do with state of the art sound systems, theatrical PowerPoint or commercialized songs that are limited. This is God's child, using her very first instrument to praise her God. Her. Voice. “Sing praises to God, sing praises; sing praises to our King, sing praises!”

‭‭Psalms‬ ‭47:6‬ ‭NLT‬‬
I’m returning to my roots for 2018 —lifting MY voice, to Lift HIS Name. #worshipleader to #worshipper #hymnsandspiritualsongs #EVERYBODYSING